Dunhill: Stations of the Cross Album 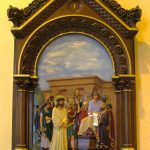 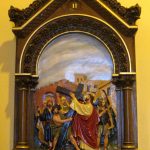 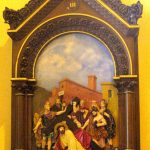 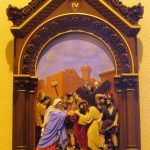 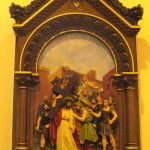 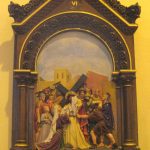 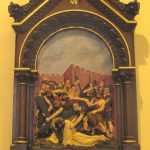 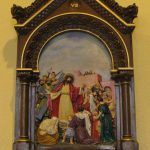 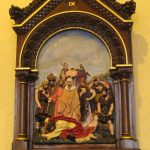 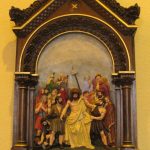 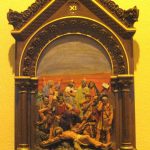 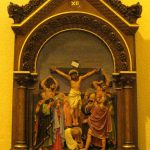 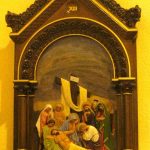 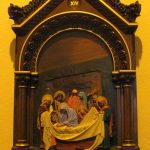 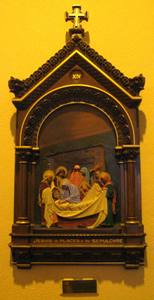 Jesus Is Placed In The Sepulchre

Jesus is dead, wrapped in his shroud, the empty spice jar on the floor. At his head and feet are Joseph of Arimathea and Nicodemus. One soldier is present – presumably the faithful centurion. Jesus’ mother holds him and looks down on his face. Behind her are the three grieving women of Galilee. On her right is the beloved disciple. –
“So they took the body of Jesus and bound it in linen cloths with the spices, as is the burial custom of the Jews. Now in the place where he was crucified there was a garden, and in the garden a new tomb in which no one had yet been laid. So because of the Jewish day of Preparation, since the tomb was close at hand, they laid Jesus there”. [John 19:40-42].

Crucifixion was usually a slow, lingering death. When necessary, to hasten death, a victim’s legs were broken and then suffocation quickly ensued. The dead victim was left to rot on the cross unless the body was claimed by a relative. –
“Since it was the day of Preparation, and so that the bodies would not remain on the cross on the Sabbath (for that Sabbath was a high day), the Jews asked Pilate that their legs might be broken and that they might be taken away. So the soldiers came and broke the legs of the first, and of the other who had been crucified with him. But when they came to Jesus and saw that he was already dead, they did not break his legs. But one of the soldiers pierced his side with a spear, and at once there came out blood and water”. [John 19:31-34].

In the tableau we can see clearly the wound in Jesus’ side caused by the spear. Traditionally, it is his right side.

The two men are Joseph of Arimathea and Nicodemus –
“After these things Joseph of Arimathea, who was a disciple of Jesus, but secretly for fear of the Jews, asked Pilate that he might take away the body of Jesus, and Pilate gave him permission. So he came and took away his body”. [John 19:38]. Only John’s gospel mentions Nicodemus.

The mother of Jesus clasps his left hand while the beloved disciple supports his head. Three other women are present. –
“There were also many women there, looking on from a distance, who had followed Jesus from Galilee, ministering to him, among whom were Mary Magdalene and Mary the mother of James and Joseph and the mother of the sons of Zebedee”. [Matthew 27:55-56].

The Twelfth Station The twelfth station Jesus Dies On The Cross  Jesus is finally “lifted up”. The two robbers are crucified on either side of Jesus. In their case they are tied to their crosses with ropes – another common Roman practice. The tableau shows Jesus raised above the ground by less than a metre rather than the ten metres seen in some paintings.Pilate’s inscription is now seen nailed to the cross –
“Pilate also wrote an inscription and put it on the cross. It read, “Jesus of Nazareth, the King of the Jews.” Many of the Jews read this inscription, for the place where Jesus was crucified was near the city, and it was written in Aramaic, in Latin, and in Greek.'” [John 19:19-20].Jesus’ mother looks on. Beside her a man covers his face in anguish. Is this “the beloved disciple”? –
“When Jesus saw his mother and the disciple whom he loved standing nearby, he said to his mother, ‘Woman, behold, your son!’ Then he said to the disciple, ‘Behold, your mother!'”. [John 19:26-27].Is the soldier in the foreground the centurion who made the declaration of faith? –
“When the centurion and those who were with him, keeping watch over Jesus, saw the earthquake and what took place, they were filled with awe and said, ‘Truly this was the Son of God!'” [Matthew 27:54].The dedication on the brass plate below the tableau is: 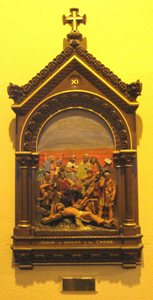 Jesus Is Nailed To The Cross

Two men are nailing Jesus’ hands to the cross – his feet have not been nailed as yet. In fact, the practice was to drive the nails through the wrists rather than the palms and through the heels just in front of the Achilles tendons rather than through the insteps. There would have been no footrest or, at best, a very basic one. Also, Jesus would have been completely naked – this was meant to be a shameful death as well as a very painful one.

The youth who has been carrying the INRI notice is unable to watch the nailing and covers his eyes. Jesus’ mother lifts her arms in anguish and the man in green behind her covers his face. 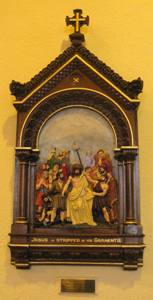 Jesus Is Stripped Of His Garments

One man tugs at Jesus’ tunic while a soldier holds his cloak aloft. The man in the bottom left corner is busy with his tools but it is not clear what he is doing. Perhaps he is nailing the footrest to the cross – the footrest has not been seen in any of the previous stations.

The three men in the background are having a discussion, stroking their beards, while the group of women is mourning.

The two men on the right are in a pensive mood. Jesus is submissive. 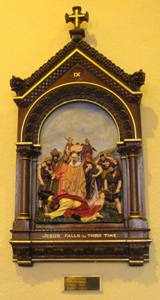 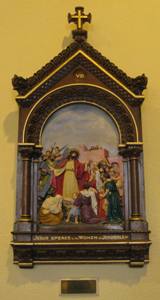 Jesus Speaks To The Women Of Jerusalem

Luke is the only evangelist to record this event –
“And there followed him a great multitude of the people and of women who were mourning and lamenting for him. But turning to them Jesus said, ‘Daughters of Jerusalem, do not weep for me, but weep for yourselves and for your children. For behold, the days are coming when they will say, “Blessed are the barren and the wombs that never bore and the breasts that never nursed!” Then they will begin to say to the mountains, “Fall on us,” and to the hills, “Cover us.” For if they do these things when the wood is green, what will happen when it is dry?'” [Luke 23:27-31].

Five women and three children are in the foreground representing the many who were actually present. The flagellum carrier is having a quiet moment and Simon is still carrying his piece of the cross.

Two men are watching everything from the top of the city walls. 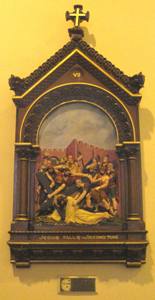 Jesus has fallen again and a Roman soldier reaches out to help him. The man with the flagellum is strangely quiet, but the man next to him appears to be about to strike Jesus or the soldier with his raised right hand while Simon of Cyrene tries to prevent him.

The scene is quite crowded with thirteen people present including four soldiers. It is a scene of great activity but the priestly figures in the background are unperturbed and look serenely on.

The soldier at far right is frowning with his hand on his chin. What can he be thinking? 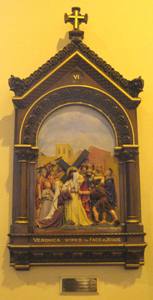