The Church of the Immaculate Conception, Fenor

The late 19th century was a time of extensive church building all over Ireland. The days of the old thatch-roofed chapels of the 18th century were well gone but the buildings that had replaced them were very much in need of repair or restoration by the 1880s and 1890s. The horrors of the Famine years were fading from the people’s minds and a certain prosperity was in evidence all over the country. Farmers were beginning to gain ownership of the land and there was work in plenty for the labourers.

One of the best-known architects of the period was Walter G. Doolin, whose work on churches took him over a large area of Munster, Leinster and Connaught. In spite of the fact that a lot of building was taking place, it was not an easy time for architects to show their skill and originality. Very few “green field” sites were to be had and, in most cases, an old church already existed, so restoration or enlargement was the problem that faced the builder.

Doolin’s first official visit to Dunhill-Fenor was in 1881 when he was responsible for the building of the Parochial House in Dunhill and the Teacher’s Residence in Fenor. For these two projects Rev. Fr. John Dowley held a collection in both sections of the parish. A sum of Â£402 was realised. Strangely enough, the tenders for the residence survive among Doolin’s papers and they were as follows: 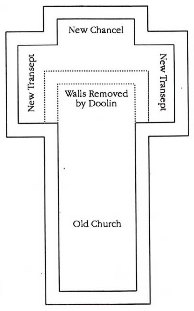 As far as we know, there is no photograph or drawing of the Fenor church as it was in 1893 when Doolin arrived again in the parish at the invitation of Fr. Dowley. Somewhere among the architect’s papers there must be a plan showing the old building but, up till now, it has not been discovered.
In 1893 the church in Fenor was a building slightly shorter than the present one. It would have stretched from the present main door to the pillars supporting the arches of the transept: this means it would have measured 67 feet long by 23 feet wide, internally. It may be assumed that a sacristy was at the rear of the church. The building was rectangular in shape, which means that transepts or aisles did not exist. A rough estimation would say that there was seating for 250 people.

Fr. Dowley would have drawn attention to the fact that the church was too small for his congregation which had increased during the previous years (there were almost two hundred pupils in the school at the time), that the roof needed to be replaced, and a more impressive building was called for. Doolin’s survey of the building revealed that the walls were sound and could be retained and that the enlargement would take place at the east (altar) of the church. Plans were prepared and tenders invited for the work. The successful bid was received from Mr. George Nowlan of Waterford – the same man who had built Dunhill church ten years previously. Unlike Dunhill, all local documents dealing with Fenor are missing so there is no definite idea what the work cost.

Doolin was always happy with the exposed stonework in Dunhill church and hoped to repeat it in Fenor. However, when the old walls were cleared of the plaster and dashing, he was disappointed to discover that the stonework, while sound, was not visibly good enough to be left exposed. he therefore ordered that, when finished, the whole building, old and new, would be plastered and pebble-dashed.

Doolin was a very busy man. In 1890 he was engaged on the church in Aherlow. In 1892 he was working on both Leighlinbridge and Borrisoleigh, but he had work in progress in Fenor in 1893. As the old church would have to be unroofed, the problem of a venue for Sunday Mass would have to be solved. It is possible that the school could be used (it stood in the present car park) but I was told, many years ago, by Mr. Richard Flynn, RIP, who was ten years old at the time, that a temporary chapel was erected in what is now Mr. John Cheasty’s lawn.

Having removed the roof, George Nowlan now concentrated on the east end. The old altar was removed and then the end wall was demolished. The side walls, north and south, were shortened by approximately 14 feet. Having cleared and levelled the area, the two new transepts were built, each 16 feet back from the position of the original east end. Quite a lot of work had to be done on the west end (main door) as a large opening had to be made for the impressive present doorway and for the windows overhead. (It is even possible that the entire gable was removed because Doolin’s sketch drawing of the proposed church shows a beautiful bell tower on the apex of the east wall and this would entail strengthening the gable to support it.) The most complicated operation was the erection of the beautiful double Roman arch openings into the transepts . The arches spring partly from the old walls, partly from the new walls, and are supported in the centre by a very graceful pillar.

Having roughly finished the building of the walls, Doolin and Nowlan then came face to face with a serious “labour” problem. To relieve the overall greyness of the restored church, the architect decided to enclose the windows, doors, gable and corners with the red terracotta blocks that we see there today. This material – called Ruabon brick – was imported from Ruabon in central Wales. Whether the local workers objected to imported material or whether they were nervous of working with unaccustomed brick, they refused to touch it. The material lay on the quay in Waterford for a long period, with no one willing to cart it out to Fenor. We would like to know how the problem was solved but we can be sure that Fr. Dowley must have said a few well-chosen words!! Eventually the problem was solved, the material was delivered to the site, and work progressed.

Limestone corbels were inserted in the walls above window level to help support the roof which is a simple but beautiful piece of construction. To allow for extra seating, a very substantial gallery was installed over the main door, and it also is an impressive piece of wood-working.

A new sacristy was added to the east end and it was so constructed as to merge in with the overall appearance of the church. Windows and Stations of the Cross were donated by parishioners as were also some of the pews. The restored church was so completely different from the original that even the old name “The Church of Our Lady’s Nativity” was changed to “The Church of the Immaculate Conception”.

The church was ready for use in late 1894 and the saddest fact is that the man who did most to create it, namely Fr. Dowley, never saw it completed. He died early in 1894. Although in use, many small jobs still remained to be done. For example, the fine Hiberno-Romanesque main door was not completed until after 1897 at least, as the lovely piece of sculpture in the arch was donated by the Crotty family in memory of a person who died in 1897.

Of all the churches that Doolin restored and enlarged, he always had a special love for Fenor. He regarded it as one of his most successful works. He freely admitted flaws that were visible in some of his previous buildings. Kilgobnet, restored in 1883, was described as “much improved” but the darkness of the nave is often commented on. In Dunhill, he departed from his love of the Roman (round) arch and tried a new idea – a somewhat flat arch. Doolin admitted that it was not a happy choice, and he never used it again. In Leighlinbridge, he allowed the new chancel to be too long so the altar is hidden from the congregation in the transepts. In Fenor, he remembered these mistakes and built a church full of light, which is regarded as a gem by many experts. 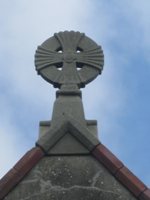 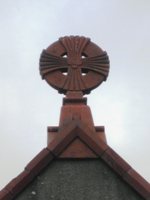 Doolin’s sketch of the proposed church in Fenor shows a beautiful bell tower on the apex of the west gable. This was never built and, instead, a cross of Ruabon terracotta was erected. In the 1960s this cross was shattered by lightning and was replaced by a fibreglass cross which is still there. I wonder would the bell tower, with its chain to the ground, have survived the lightning strike? Perhaps to celebrate some future anniversary of our lovely church, the bell tower might be placed over the fine main door to complete the work as Doolin foresaw it 101 years ago.
[The picture on the left shows the present fibreglass cross on the apex of the west gable. On the right is a picture of the cross on the south gable, which is original.]

Donors of the Stations of the Cross

The present Stations of the Cross are originals which were installed very soon after the church was restored, and the donors are as follows, beginning with the first station:

The Donors of the Windows

The large, stained-glass windows over the altar bear the following inscription:
“Pray for the Rev. John Dowley P.P. at whose cost this window was erected. He built the churches of Dunhill and Fenor. A.D. 1883 – 1894”.

This shows that they were installed when the church was restored. All the other windows were replaced within the last 50 years. The donors of these replacement windows (beginning with the north transept, continuing down the nave, and finishing in the south transept, are as follows: 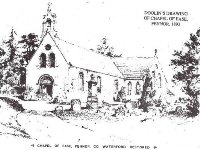 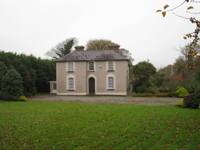 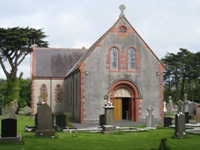 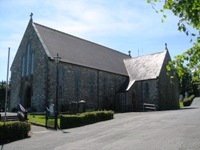 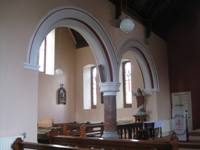 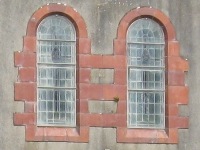 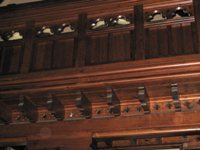 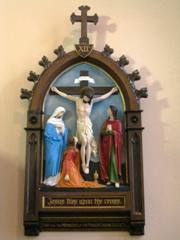