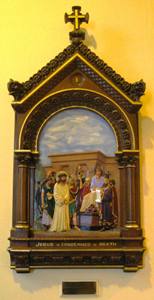 The tableau shows Jesus standing with hands bound before Pontius Pilate as the charges against him are read out –
“Now Jesus stood before the governor, and the governor asked him, ‘Are you the King of the Jews?’ Jesus said, ‘You have said so.’ But when he was accused by the chief priests and elders, he gave no answer. Then Pilate said to him, ‘Do you not hear how many things they testify against you?’ But he gave him no answer, not even to a single charge, so that the governor was greatly amazed”. [Matthew 27:11-14].

The Roman soldier standing next to Jesus is carrying a standard that has a manus or hand at the top. This signifies the oath of allegiance that each soldier took.