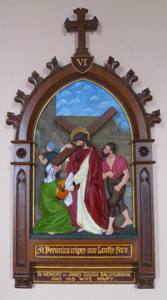 There is no mention of Veronica in the gospels but  devotion to Veronica has existed since the middle ages. You can read a little more about her in connection with the second stained-glass windowof the north nave in Dunhill church.

The soldier, who has been most attentive to his duty so far, is shown in the tableau looking through a doorway with his back to Jesus, giving Veronica the chance to approach Jesus. The soldier will not be seen again until the tenth station.