[ A confraternity is normally a Roman Catholic organization of lay people created for the purpose of promoting special works of Christian charity or piety, and approved by the Church hierarchy. Confraternity activities are often associated with burial as parishioners sometimes find it difficult to pay for the funeral arrangements. This was particularly so in former times. In this article, Bob Rockett gives us his particular slant on the Confraternity. – Comms Team. ] 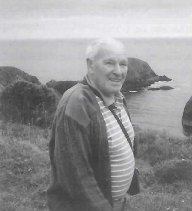 “Sunday is Confraternity Sunday”. This was an announcement most likely to be made at the main meal on the previous Thursday or Friday when all the family was likely to be assembled. In most cases it was not entirely welcome, especially by the male members. It involved examination of conscience, trying to sort out the deliberate indiscretions, and making excuses where the prevailing situation created doubt as to the seriousness of the offence. Were the circumstances in your favour to make it a venial or the more serious mortal sin? Not conducive to a carefree weekend.

A further reminder was issued mid-Saturday. How could one forget? You cleaned up Saturday evening making your way to the village to join the other penitents, male and female, in similar frame of mind. Any distraction was welcome to counter the idea of having to bare your soul, only having entertained thoughts of what might be the delight of the aforethought exercise.

Confraternity Sunday in the long summer evenings. The village was busy, lads arriving to the local shop for their cigarettes, razor blades and perhaps hair oil. There would be lads lining up for haircuts. There was a few competent local barbers with the little clippers and there was no charge. Heads and hair were neatly kept.

The church, from the outside, looked calm and peaceful. Perhaps less so inside as penitents took their places at each side of the confessional box, males on the left and females on the right. The old box was not constructed to provide privacy, except for the priest. He was seated in his small cubicle with a small slide on each side which he drew alternately, holding his ear to the grill and listening attentively, issuing the appropriate penance and dispensing absolution.

Having been shrived, you recited your penance and went out the door like a shot. It was notable that confraternity members made an effort to refrain from uttering the usual expletives at least until after Sunday. Sunday morning was a trial, going about the usual routine on an empty stomach, portraying your best devout poise as if you were enjoying it. The church sported the banners denoting the different guilds, i.e., Sacred Heart, St. Joseph. The females on the left side approached the altar first for Holy Communion and then the males on the right. There was always the few hard men who didn’t conform to confraternity discipline. They tended to throw cold water on what they oft called “the holy Joes”.

Their bluff was called back in 1938. The area was subjected to four nights of fierce thunder and lightning. Nothing like it has occurred since. It created fear, especially among hard men, and some were said to have pleaded to be spared until Saturday to make their peace with God. The priest at the time made the observation in his Sunday sermon that a good thunder storm was better than a mission. He had been kept busy hearing confessions the previous evening.

Village life in those times seems to have been more ordered – at least it would seem that way to those of advanced years. Communications and conversation between neighbours is no longer a feature of the 21st Century.

[ The picture on the right shows a typical confraternity banner. It is of Naoṁh Ioseṗ (Saint Joseph). The banners were carried on vertical poles and, when in church, the poles were slotted through the brass rings that can still be seen on the ends of the benches. – Comms Team. ]

This is the name of an article by Mrs. Rita Byrne in the book Fenor 2010 – Growing and Changing. Eight women shared their experiences with Rita who recorded the conversations on an old-fashioned “steam tape cassette” and transcribed them for the book. Isn’t it what we all say we should do when we meet with the older generation and get them talking? But we don’t do it and the memories are lost for ever.

The experiences related by these women are both funny and tragic and may cause you to weep on both accounts. We have taken the liberty of including some extra material (mostly in dark blue type) which, we hope, will provide added interest. You can access the stories from the menu on the left.

[ Here, now, is Rita Byrne’s short introduction to the article: ]

As remembered by the late Mary Long, Nora Crowley, Josie Drohan, Baby (Anna) Hynes, Mary B. and Peig Power, Kathleen Keniry and Josie Gough in taped conversations made in the 1980s. To their memory I dedicate this article. We will never see the likes of them again.

[ Rita ended the article with the following: ]

“It was my privilege during the 1980s and 90s to talk with the senior citizens of the community and to call them my friends. Sadly, they are all now gone to their reward in heaven. While the men told me their marvellous stories of football matches and farming and the spirit world, the ladies talked about their day-to-day lives and the hardships and happy and sad times of their youth.

They were ordinary people with extraordinary faith. By today’s standard their lives were hard and their work load horrendous, but what they had they shared willingly and they thought about others before they thought about themselves. In a society where families of eight, nine, and ten were the norm, there was little time for themselves, yet they were concerned for elderly neighbours, the sick, and the travelling people.

Nádúr, good nature, or being a good neighbour was always on their lips. The strength of women and their strong religious faith helped them to survive. Their belief in the after-life helped them in their understanding of the circle of life. Their relationship with God sustained them. This relationship was a very personal one. God was with them in everything they did and the name of God was never far from their lips.

This is the title of the latest book to be published about the village of Fenor and the surrounding area. It is a collection of memories of the people who live there, or who once lived there, as many of them are now gone. “This little book is a window to our past and the essence of who we are now”.Young people who have experienced life only as it is lived today may find it difficult to imagine that life was ever different. Those of us in our middle years who have known different times still often refuse to believe some of the stories told by our parents or grandparents about the way it was in their day.To help and encourage you to peek through the window of time we have reproduced just two of the stories told in the book. You can read them by clicking on the titles at top left. We hope you will enjoy them.

The map is an old 19th century map of Fenor 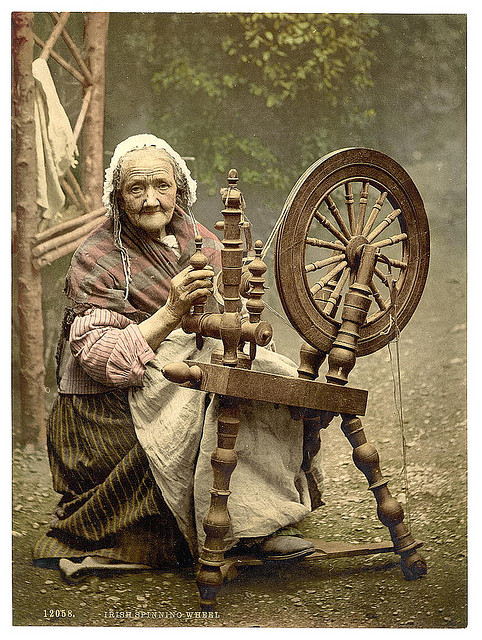 The Way It Was

This photo of a woman spinning was taken around the time our two churches were built – about 1890. How on earth did she get by without a mobile phone or a tablet?
Young people are often amazed when they hear how different parish life was when their parents and grandparents were young. So much has changed in the practice of religion. Of course, many religious practices were not religious at all but were merely superstitions, and many of them were driven off by the Archangel Solas – the electric light. Even grannies and granddads forget how it was until they are reminded.

For instance, do you remember that characteristic “bonk!” sound that was heard from time to time during Mass when the head of a fainting child banged into the bench in front? Of course you do, but you haven’t heard it for a long time, have you? Not since the rule about fasting from midnight was relaxed.

Now is your chance to remind us all of the way it was. Why not put pen to paper or fingers to keyboard and write out a wee something. Post it or hand it in to the parish office or e-mail it to the communications team. You will find contact details on the Contact Us page. It doesn’t have to be a 10,000-word opus. Little things are also important and if you think your story is interesting or humorous, we will too. So send it in to us and we will let everyone enjoy it.

To encourage you we have published a few stories which were, mostly, reproduced from books on Fenor, including the latest book, ‘Fenor 2010 – Growing and Changing’. They are available from the menu on the left of this page. Stories from Dunhill and some new stories are on the way.
We hereby exhort you grannies and granddads to compel your offspring to read these stories. It will do them good and let them see what a tough life you had and how easy it is for them now, and how ungrateful they are, and how they should appreciate you more, and … you know the routine!