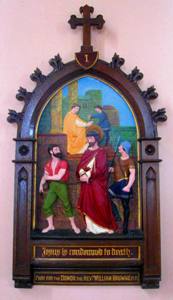 Here we see Jesus being led away, hands bound, to be crucified. At this point the Romans were in charge, but that doesn’t look like any Roman soldier that we ever saw. Pontius Pilate, the Roman governor of Judaea, wanted to release Jesus who he thought was innocent but the crowd wanted crucifixion –

“So when Pilate saw that he was gaining nothing, but rather that a riot was beginning, he took water and washed his hands before the crowd, saying, ‘I am innocent of this man’s blood; see to it yourselves.’ And all the people answered, ‘His blood be on us and on our children!’ Then he released for them Barabbas, and having scourged Jesus, delivered him to be crucified.” [Matthew 27:24-26]

We can see Pilate at the rear of the tableau washing his hands aided by a servant.