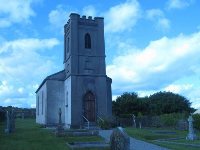 by the late Frank Power
from the book “Historical Dunhill Landmarks (1988).”

A protestant church was built in the village in 1822 and was replaced in 1850 by the building which exists today. The village had a Protestant school for much of the 19th century and, for a time, at the beginning of the 20th century. The R.I.C. had a barracks in the village until 1922 when the 26-county Irish Free State was formed. These are now used as a dwelling house. This seaside village now has a restaurant, a shop, and Seaview Celtic Football Club.