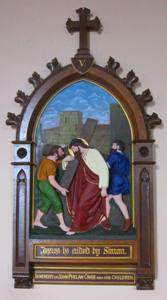 Jesus Is Aided By Simon

Simon wasn’t given the chance to volunteer for this task –
“And they compelled a passer-by, Simon of Cyrene, who was coming in from the country, the father of Alexander and Rufus, to carry his cross.” [Mark 15:21]

The tableau shows two men who are both holding the cross. Which one of them is Simon?  There may be two clues that suggest that the man in blue is Simon. First, in all of the fourteen stations only two people are not barefoot – so far as we can see. The man in blue is one of the two and is wearing brown boots. That makes him different from almost all of the rest. Second, Luke tells us that Simon was behind Jesus –
“And as they led him away, they seized one Simon of Cyrene, who was coming in from the country, and laid on him the cross, to carry it behind Jesus.” [Luke 23:26]

We will meet Simon again at the eighth station.

The words, “As they led him away” suggest that this should be the second or third station, rather than the fifth.